Erryk Cargyll was slammed into the side of the wall, Aemond holding him by his throat as the knight watched him carefully. Aemond stared at the man with thinly veiled anger, his head tilted, hiding most of his face from Aemma's view. Both men had their swords safely sheathed away.

Aemma watched from her position, frowning at the force with which Aemond was ensuring her safe passage. There had been whispers in the corridors that Ser Erryk was more loyal to Rhaenyra than the Greens and was upset by the usurping. It made him the perfect candidate to entrust with her escape.

"If any harm comes to Princess Aemma while under your care," Aemond's voice hardened, "I will personally ensure great harm comes to your family,"

"You do not need to threaten me, Prince Aemond," Ser Erryk said as Aemond dropped his grip, "I would be honoured to ensure Princess Aemma's safe return,"

The two men turned their attention to Aemma, who was pacing back and forth, deep in thought. While she looked the part of a princess, her fine silks and rings adorning her body as though it was just another day in the Red Keep. But for anyone who looked closer into her eyes, it was clear she held sorrow there.

It was a dark day for the Targaryen lineage indeed.

"We'll be alright, Aemond," Aemma said, finally halting her continuous movements, "Ser Erryk is a good man. I have no doubt he'll see me to safety,"

The two newlyweds rushed towards one another, their foreheads touching as they took in their last moments together for what would feel like an eternity. They would get no marital bliss or time to enjoy their new status. They would have to make do with the little time they had.

Aemond's thumb caressed Aemma's cheek as they stared at one another, trying to hold onto one another for just a second longer.

"You're hurting me," Aemond whispered, his hand moving down to her chin, "You cut me deep by leaving,"

"I know," Aemma's voice was barely a whisper, her words just for Aemond to hear, "But I must, for us,"

Aemond's grip on her was firm as his lips crashed into hers, pressing her ever closer to him. Aemma held onto him, keeping herself stable as she returned the heated goodbye kiss. If they could, their bodies would have gotten closer to each other. Closer still, their bodies melting together.

It was gone too quickly. Their love. It was hard to tell who let go first, Aemond or Aemma, but the two stood apart slightly, their hands laced together. Aemma didn't let herself move, her eyes closing as she tried to soak in the last friendly meeting she would get with Aemond for a while.

"I must go," Aemma said hoarsely, tears escaping her left eye before being followed by her right, "You must go too. You have to bear witness to a crowning,"

Aemond nodded, his eyes staring at the burning torch to try and fight his own tears. Glancing up at her, his hand found its way to the back of her head as he gave her a parting kiss on the forehead.

Their hands were the last thing to separate.

Aemma stood in perfect stillness, her heart fighting over the conflicted feelings of joy and despair.

"Princess-" Ser Erryk began after minutes of silence from Aemma.

"I hate to burden you like this, Ser Erryk," Aemma said softly, letting out a large breath as she gathered herself, "But I must ask you one more thing. We must find and rescue my grandmother, Princess Rhaenys,"

"I am glad we are both thinking similarly," Ser Erryk said, grabbing a cloak out of Aemond's wardrobe, "But we must hurry,"

Ser Erryk held onto Aemma's hand as they hurried through the darkened halls. Luckily, most of the Knights had been sent to the crowning ceremony already or were ensuring the Greens were safely making their way through the crowds of confused smallfolk.

Aemma slowed as they made their way to Rhaenys chambers, locked up just like hers. But, unlike hers, Rhaenys had been allocated a Kingsguard member to stand guard. Aemma guessed that Aemond sent hers away.

Ser Erryk easily overpowered the guard, kicking the door open and ushering her inside.

Upon seeing one another, Aemma and Rhaenys rushed to each other in an embrace. Being stuck in confinement seemed to have brought the two women together, two women who hardly interacted with one another due to Aemma's lack of Velaryon characteristics.

"They locked you in here as well?" Rhaenys asked, her hands on Aemma's forearms.

The role of the loving grandmother had not often been afforded to Aemma by Rhaenys, but it was desperately needed.

"It does not matter. We are both free," Aemma said, handing the cloak to Rhaenys, "My hair blends in better than yours,"

"And who is this," Rhaenys asked, turning to Ser Erryk.

"I cannot let this treachery stand," Ser Erryk said, standing tall, "I wish to get you both back to the rightful heir to the Iron Throne,"

Aemma felt a clench in her chest, knowing Rhaenys hadn't felt much love or admiration for her mother since the allegation of Rhaenyra killing Laenor began speculating. Aemma knew the lies were just that, falsities to spoil Rhaenyra's public perception. But Aemma also knew that Laenor was Rhaeny's only son, and it didn't matter how Laenor died but just that he did.

What Rhaenys seemed to often forget was that Laenor was also special to Aemma. He was her first-ever father.

"You have no chance at the crown anymore, grandmother," Aemma said, desperate to gain her mother the allies she desperately needed, "But my mother does. It was a mistake not to put you on that throne, and now Alicent wishes you to do to my mother exactly what happened to you,"

Aemma stared deeply into her grandmother's eyes, hoping she could still break through.

"Rhaenyra is a better fit than Aegon, who doesn't even want the crown," Aemma said, almost pleading at this point, "Yet Alicent wishes to unseat the true queen for a man. Women do not need to be guides for men. Fuck men, we are surely better suited for the role of ruler,"

Oh nooo, we're heading towards the end of the seasonnnnn

I didn't end up writing a scene I was going to have where Aemma would realise she's pregnant and tell Rhaenys but I did make a meme for it. 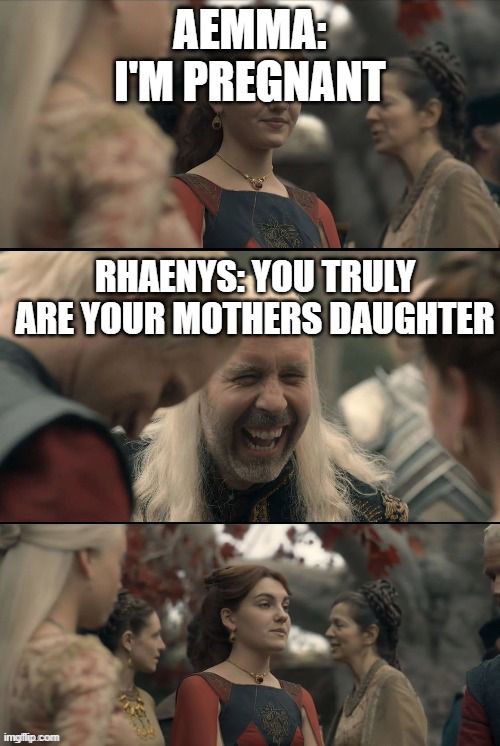 009. Your desires above all

014. Ladies and Gentlemen: Her