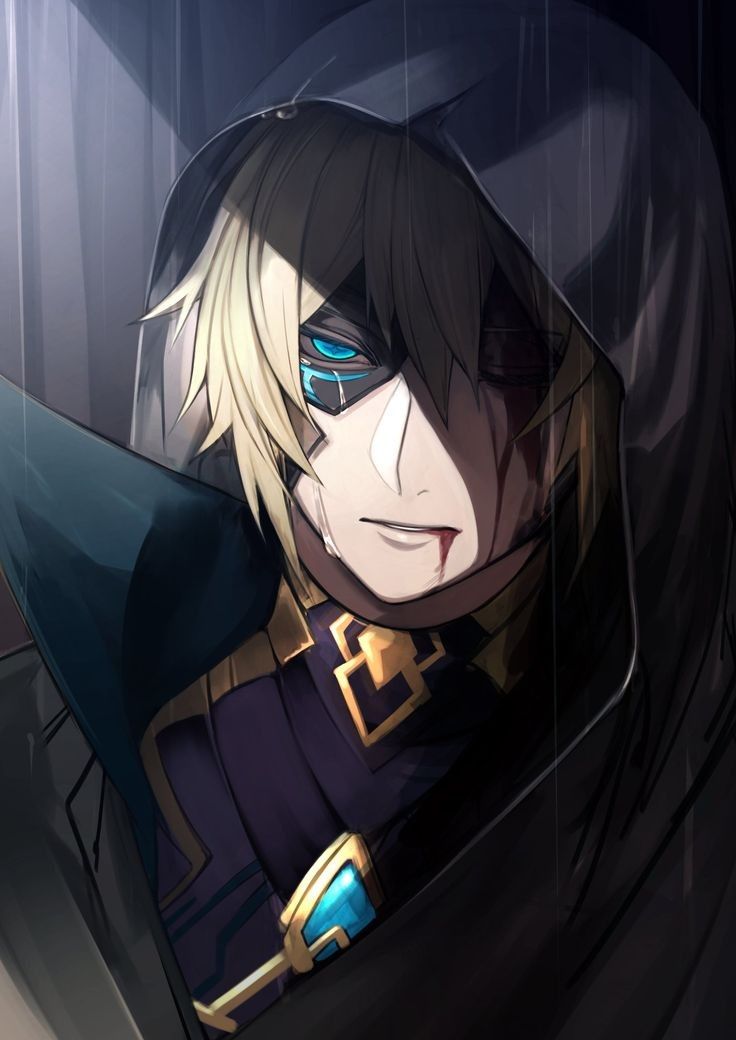 Swinging the claymore in your hands, you finished off an Abyss Lector. Dainsleif, who was behind you, had slain hoards of Abyss Mages.

You panted heavily, the chill of the air feeling like glass shards in your lungs.

How were you able to get here?

Dainsleif had brought you on a mission with him, and it involved breaking into a heavily guarded area of the Abyss.

He told you that it would be a dangerous and difficult task, but he was going to interrogate them and try to obtain more information on your origins.

You thanked him for his kindness and told him that he didn’t need to do that, saying that he could just continue on trying to destroy the Abyss. However, he refused and stated he was going to interrogate them either way.

So here the both of you were, panting and watching the bodies of the monsters fade into ash.

You walked up behind Dainsleif, watching him as he deactivated his special magic.

He sighed as he turned to face you, wiping the blood off your cheek.

"Are you alright?" He asked kindly, making sure that you were ready to kill the rest of them.

"Of course. Don’t worry about me, I'll be fine." You told him, putting your claymore away so you could walk more easily.

"But... they tortured you. Are you sure you’re alright to face them again?" He asked once more, his hand now brushing the hair out of your face tenderly.

He was hesitant at first, but eventually, he let you fight them again. He wanted to see how you would react to them now.

Before, you were terrified; even the smallest noise from an Abyss Mage made you jump and hold onto Dainsleif.

But that was a while ago, you've grown and now you hate them with every fibre of your being. You’re ready to kill them.

Although Dainsleif always told you to be careful and to back off if they seemed too powerful, you barely listened to that rule.

The both of you have been quite busy, hunting down the Abyss for over a year now, and you’d grown quite acquainted with one another.

There’s always been a fuzzy and tingly feeling in your chest every time you looked at him. You assumed that this was just how your body would react to seeing someone that you cared about so deeply, so you brought it up in a conversation with Aether.

Well, you learned more about yourself that day from that conversation.

He told you about how that’s what lovers feel, and your face went red, He laughed, and eventually was able to get it through to you that it's not a mere friendship, but something more.

It's been on your mind ever since he said it, but you couldn’t let that thought get in the way now.

Did you actually love Dainsleif? The man who saved you from the abyss?

Although it wasn’t too surprising, it still made you rethink how all of this happened.

You shook the thought out of your head as you caught up with Dain, holding onto his cape so you didn’t get lost.

He turned to you, taking your hand off his cape, then intertwining his fingers with yours.

There was a faint blush on the tips of his ears, his gaze leaving yours as he walked forward, not speaking a word.

You felt heat rush to your face, glancing down at his hand that was bigger than yours; slipped between your fingers and gripping firmly.

This is definitely more than friends.

N-no way! There’s no way... I could I thought that you couldn’t fall in love with your friends!

This is difficult to understand.

Maybe I should talk to Aether again. He could tell me.

"Y/N. Are you listening?" He spoke carefully, ripping right through your thoughts.

He sighed softly, tugging your hand forward so you now stand next to him, instead of behind.

"There’s going to be a lot of monsters. If you need help, come to me. I will protect you."

Those words made your heart flutter, he really does care about you.

"Ok. I'll be careful." He nodded to your response, then turned the corner to see a room full of traps and monsters, and an upside-down Statue of the Seven, the kind from Mondstadt.

You took out your claymore, tightening your grip on it as Dainsleif used his magic to increase his speed and ambush them.

Quickly springing into action, you threw your claymore into the centre of the monsters, water flowing from your worn-out weapon. Then quickly sprinting over to it, you grabbed it and started swinging, all of your attacks now converted into Hydro.

The monsters shrieked and tried to reach you, but you blocked them with your claymore, deflecting the attacks.

Dainsleif took on the Abyss Lector, using his momentum to dash around and slash it with his magic that had now sharpened into swords.

You laughed at the action, it felt good to get revenge on the monsters that tortured you endlessly for aeons.

Although you got hit on numerous occasions, you still managed to kill them all except one with Dainsleif.

You aimed to throw your claymore again, but Dainsleif stopped you.

There was an Abyss Herald laying helplessly on the floor. You glanced at Dainsleif, confused, before he used his magic to keep it still.

It grimaced at the feeling, squirming around as Dainsleif tightened his hold.

"I have questions that require answers. You will provide them. Now." He spoke intimidatingly.

It snarled, looking up to lock gazes with Dainsleif.

"What- kind of answers..." Its voice was creaky as it glared at you two.

"Why were you experimenting on Y/N?" He asked, his own voice low with ire.

"’Y/N’? Oh, ha, that girl was very special." The Abyss Herald chuckled at your name.

"What do you mean by that!" You shouted in anger, stepping closer with your blade raised.

It flinched and looked up at you.

"Oh, is that you, Y/N? So, you've been living a nice life outside of the Ab-" The Herald was cut off by Dainsleif clenching his grip on the magic. It choked out its response.

"Agh! S-she was used for investigations. Trying to figure out how such an ordinary girl could withhold the amount of power that could be wielded to help destroy a nation."

Your eyes grew wide at its statement.

What the fuck is this thing talking about?

"What the hell do you mean, ‘destroy a nation’." You demanded.

It snarled again, snapping at you as you grew more impatient by the second.

"You… you helped destroy Khaenri’ah! Did you forget?!" The Abyss Herald bellowed, the information being processed in your brain.

Dainsleif didn’t know how to feel about the Abyss Herald’s proclamation.

The person that he loved helped destroy his nation.

Was he supposed to hate you now? Love you still? Want to kill you?

As the Abyss Herald screamed at you once more in outrage and fury, you stood motionless, not moving a muscle.

You were overwhelmed by feelings, trying to understand. This was too complex, and you started feeling exhausted, wanting to forget those horrible words that came from the Abyss Herald.

Dainself was struck silent himself, his eyes wide. He couldn’t speak, couldn’t move, couldn’t do anything except try to comprehend the truth.

"I'll say it again since you can’t understand. You. Helped. Destroy. Khae-"

Dainsleif’s magic loosened from the Abyss Herald as tears welled in your eyes.

Dainsleif felt his heart pang in his chest, an unknown feeling creeping into his very soul.

All other sounds grew silent. He could only stare at your yelling and crying figure.

A vision of a girl with extremely long H/C hair projects into his mind.

She was dashing past Dainsleif, trying to kill him.

He dodged and hit her instead, except her blood was blue, the shade of the Abyss magic.

She looked up and glared at Dainsleif, her sharp E/C eyes boring holes into his skin.

She quickly dashed away, leaving Dainsleif alone to defend his nation.

He snapped back to reality when you had become anguished enough to swing your claymore, hoisting it over your shoulder to soon be slammed down onto the Abyss Herald.

"You’re lying!!! I don’t remember any of it! It's fake, it’s got to be! Fake! Fake! Fake!" You shouted as Dainsleif quickly came behind you and detained you, his magic seeping around your body and pulling you back.

Tears still marched down your face, your claymore dropping to the floor. You struggled desperately, trying to squeeze your way out, but to no avail.

Dainsleif swiftly killed the Abyss Herald, shooting a blade of magic into its skull.

He turned to your sobbing and fighting figure, the magic around your waist, head, wrists, and legs restraining you from doing anything brash.

"Y/N..." he spoke solemnly, slowly letting the magic fade as you collapse on the floor, salt stains marking your face.

He kneeled down, his arms slipping under your own. Pushing your face into the crook of his neck, he engulfed you into a tight hug, similarly to how he did when you received your vision.

Tears pricked the corners of his eyes, his throat feeling tight as you gripped onto his shirt firmly, sobbing into his shoulder.

He stroked your back softly, pressing a kiss to the side of your head.

He shushed you, raking his fingers through your hair.

"I-it doesn’t matter." He spoke quietly, yet his voice had strings of pain and agony woven into his tone.

You felt his chest heave, a hiccup escaping his lips.

"A-are you crying?" You asked curiously.

He nodded, pressing his nose into the crook of your neck.

His voice strained as he let out a keening cry, a sound he’d been holding back for centuries.

And yes, I have an editor now and HOLY shit they made this alot better I dont even think I did anything at this point😭not that I'm complaining tho

Editor Arty_Miss: Damn ok, here comes the pain train ig. As an angst lover, I am revelling in the sorrow >:D